“Remember that you are standing on the lands of the Kulin Nation.”

I heard this statement in a video near the end of my trip through the Melbourne Museum’s Bunjilaka Aboriginal Cultural Center. The center is named for Bunjil – the creator deity of south-eastern Australia. Literally, it means “the place of Bunjil,” and is meant to emphasize the continued existence and evolution of Australia’s Aboriginal people. Throughout my four days in Melbourne, I observed the active nature of this existence, and the struggle Aboriginal people face every day just to have their rights recognized in their own land.

Among the most visible signs of that struggle is the fight over Australia Day. Australia’s official national holiday falls on January 26 every year and commemorates the 1788 arrival of the first British fleet in what would become Sidney. It has been a controversial holiday throughout its history, and in 1938 was accompanied for the first time by an organized Aboriginal Day of Mourning. To many Australians, it’s an excuse for a family barbecue. For Aboriginal Australians, it marks the invasion of their countries, and carries different names: Survival Day, and more prominently during my visit, Invasion Day.

As an American, the date brought to my mind the celebration of October 12 as Columbus Day in the United States, and the recent movement to rename it Indigenous Peoples Day. But even that is not quite right – our national holiday, after all, is Independence Day, July 4. Australia Day is a combination of the two, the celebration of a nation on the very date which saw its original people conquered.

After my visit to the Bunjilaka Center, I chose to attend the Invasion Day rally. 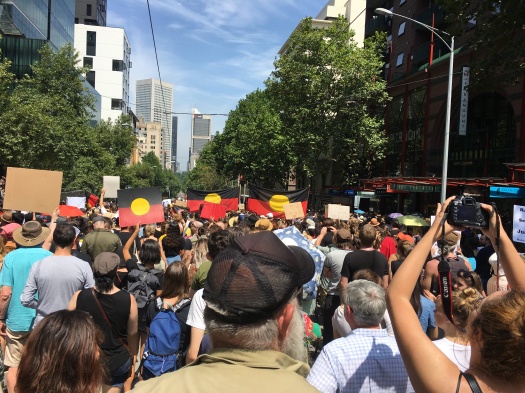 It was peaceful, heartfelt, and huge. Official estimates place the crowd at 60,000 people, more than the other celebrations. At the end, we listened to speeches by Aboriginal Australian leaders, including Gary Foley, a former Australian Black Panther who follows in the footsteps of Marcus Garvey, and Jenny Munro, a Wiradjuri elder. You can see video I took of Foley’s speech here, and of Munro’s speech here (though sadly you won’t see much of her face due to my angle). Both activists helped found Aboriginal “tent embassies” in Canberra and Redfern to promote aboriginal rights.

Both speeches were full of equal parts optimism, humor, and anger. Munro spoke of voting for politicians who resist the “white virus” brought by European settlers who felt they had a right to land held by Aboriginal Australians.

Overall, Munro struck a conciliatory tone. “The only way you can stand on your own true feet and be proud is to embrace the truth, and not deny history. Learn from the mistakes of history and then we can go on and build a land we can truly call our home for all of us.”

Foley emphasized the importance of studying the past. An activist for most of his life, Foley entered a degree program in history at the University of Melbourne when he was nearly fifty, “because that’s where I considered some of the worst of the academic historians who were distorting our history [were].” He worried that the work of Aboriginal Australian activists had been misrepresented, and perhaps worse, forgotten. By earning a degree, he hoped to share his history with younger people, something which he was able to do, first at Melbourne University and later at Victoria University.

Foley lectured like a historian, peppering his speech with colorful language to draw reactions from the crowd. “In 1972 with the Black Power movement and the Aboriginal Embassy, we had Australian politicians shitting themselves, running for cover. They feared the movement we had created. And the movement that we had created was like this – I can see it today. The government cannot ignore this sort of protest, cannot ignore this sort of movement.”

Both speakers made me think of my project – about ensuring that the history we teach in American high schools includes multiple perspectives, especially those outside the dominant culture. For many people at the protest, myself included, the history of the Aboriginal Rights movement in Australia was completely foreign. As Munro said, it is only by learning the history of a land that all people can come together and work for a better future. We ignore the stories and knowledge of those around us at our peril.

As Aboriginal Australian singer Dave Arden put it later that night, on stage at the gloriously grungy old music club The Tote, “Once you’ve eaten honey from the wild bee, then you can come talk to me.” Arden’s ancestors have lived in Australia for 60,000 years. The knowledge they passed down about the land should not be forgotten by its modern government. Eat the wild honey. Learn the history of the land and its people. By doing so we will better understand our space and our time, and make it better for all of us. 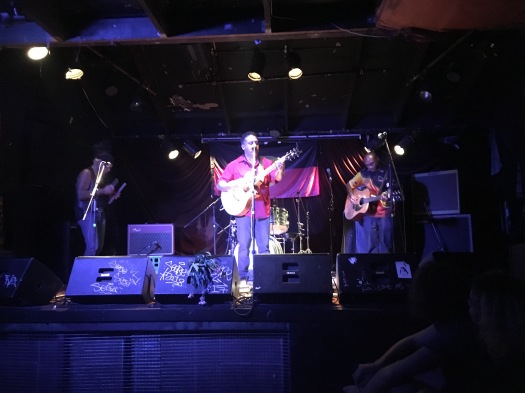 I’m in something of a strange position. In January I leave my classroom for another country, but it’s December and I’m locked in the mad rush towards Winter Break and final exams. I exist in two worlds – one as a high school teacher, another as a person preparing for a fellowship – but lately my prep and pedagogy have focused on the same thing: respect for culture and community.

Let’s start with my project. While in New Zealand, I hope to observe culturally-relevant and –sustaining teaching practices at a variety of schools. These are academic buzz words, but each serves as a useful shorthand for what Gloria Ladson-Billings terms “just good teaching!” According to Ladson-Billings, a culturally-relevant pedagogy is one that “empowers students to maintain cultural integrity, while succeeding academically.” Lessons aligned with this theory become more meaningful because they relate to and are informed by what students experience outside of school.

Culturally-sustaining practices take this idea further. A culturally-sustaining pedagogy not only works to make learning relevant to a student’s culture, but, in the words of Django Paris, intentionally “seeks to perpetuate and foster—to sustain—linguistic, literate, and cultural pluralism as part of the democratic project of schooling.” It is not enough that good teaching responds to a student’s culture – it must also help maintain that same culture.

Key to each theory is the idea that the teacher is an active observer long before they enter the classroom. If I am to ensure my lessons connect to and support culture, I must learn as much as possible about each student and their community. Though this is already a core part of my teaching practice, preparing for my Fulbright project Fulbright has renewed my focus on proactive and ethical community engagement.

In her essential Decolonizing Methodologies, Linda Tuhiwai Smith discusses a set of responsibilities which researchers in New Zealand have to the Māori people. Smith filters these responsibilities through Kaupapa Māori, a philosophy which establishes Maori practices as the norm, and describes them in cultural terms:

At their core, these responsibilities remind observers that they are not present to profit from an experience, but rather to look, listen, learn, and record with the utmost care and respect for their hosts.

These same responsibilities apply to teachers. No matter how long we work at a school, many of us are visitors to the community. This problem seems likely to get worse, as municipalities move to close neighborhood schools and build magnets and other alternatives far from the places students and teachers live. In such a climate, it is essential for teachers to treat the communities we enter with the utmost respect. We must not be transients on our way up the administrative ladder, but rather dedicated partners who learn the community’s needs and leverage our expertise to serve them.

…I collapse into my desk chair after 6th period U.S. History. It’s a good class, but exhausting. Thirty energetic sophomores always already eager to learn, full of questions, seeking answers. I’ve taught them for two years – a rarity, and a luxury. I know where they left off as freshmen, know what drives them, know what gets them to show up at school at 8:30 a.m. each day. Most days – sometimes they’re tardy. Sometimes things come up. Chicago is a great city. Chicago is a tough city.

7th period is my prep, and I’ve got grading to do. But there’s the Gmail icon waiting to be clicked, and who can resist that? And there it is, beneath a blue United States Department of State letterhead (eagle and all):

On behalf of the U.S. Department of State, I would like to congratulate you on being selected for the Fulbright Distinguished Awards in Teaching Program.

But let’s get down to it. Nine years I’ve taught on Chicago’s west side. I’ve worked and learned alongside some of the best people you could ever meet – persistent scholars with golden funny bones; patient elders well worth hearing; counselors whose couches welcomed teachers just as readily as students. I’ve also seen what inequitable funding, political malpractice, and systemic racism can do to a school community. This is my teaching context – the west side, Chicago’s beating heart.

But mine is not the only context in which learning occurs. I applied to the Fulbright Distinguished Awards in Teaching program to broaden my perspective, to see alternative pedagogical approaches and bring them home to better serve my school community. Specifically, I hope to observe the ways in which teachers in New Zealand ensure that their social studies curriculum is relevant to each student’s culture.

I will use this blog to share what I learn while away on my fellowship. I will also write about things relevant to my school community, as well as education issues in general. The title comes from Chapter 2 of Paolo Friere’s Pedagogy of the Oppressed:

For apart from inquiry, apart from the praxis, individuals cannot be truly human. Knowledge emerges only through invention and re-invention, through the restless, impatient, continuing, hopeful inquiry human beings pursue in the world, with the world, and with each other.

This is the philosophy I bring into the classroom every day: the idea that learning is fundamental to humanity, and that learning is most successful when done in connection with community. When it comes down to it, this is what the Fulbright program is all about – connecting teachers and students who might not otherwise meet, and empowering them to learn from one another.

I leave in January. This should be fun.

The views expressed on this site are my own and do not represent the Fulbright Program or the Department of State.